Train Routing, for both Train Travel and Train Accommodation, is set up in the Route Builder Step of the Itinerary Builder. Where a route has not been pre-loaded, you can create a custom route based on the train's itinerary. In some cases, Google Train Routing can be used.

This functionality is available for all Operator Packages

Navigate to the Route Builder Step in the Itinerary Builder.

You can add the route the train will travel by either selecting a specific route from a provided list (routes that have been associated with the Train), or building your own route in Route Builder. Alternatively, you can opt to not specify an exact route of travel.

When you add the train as accommodation (e.g. Rovos Rail) in the Accommodation Step, the Mobile Components browser will appear with pre-loaded routes that can be added.

If you select a pre-loaded route, the only routes you will then need to add in the Route Builder Step are the routes before and after the train trip.

If the Mobile Component browser does not list the the route for your Train Accommodation, you can create the route Custom Routing or with Google Train Routing, where available.

If you want to add a Train Travel leg to your route that is not the sort of train that is accommodation, the routing is added either using Custom Routing or with Google Train Routing, where available.

Sometimes, when building a Custom Route, a Google Train Route can be found between the two selected points. In this case the Use Google Routing button will be visible. If no route is found the button will not be present and one will need to build a custom route as described below. Currently, the Google Train routes are best supported in Europe.

From the Itinerary Builder navigate to the Route Builder step.  Select the Train mode. If the two points can be recognized by Google, the Use Google Route button will display. Otherwise the default buttons will be available. Select Use Google Route. The route will automatically be drawn onto the map. 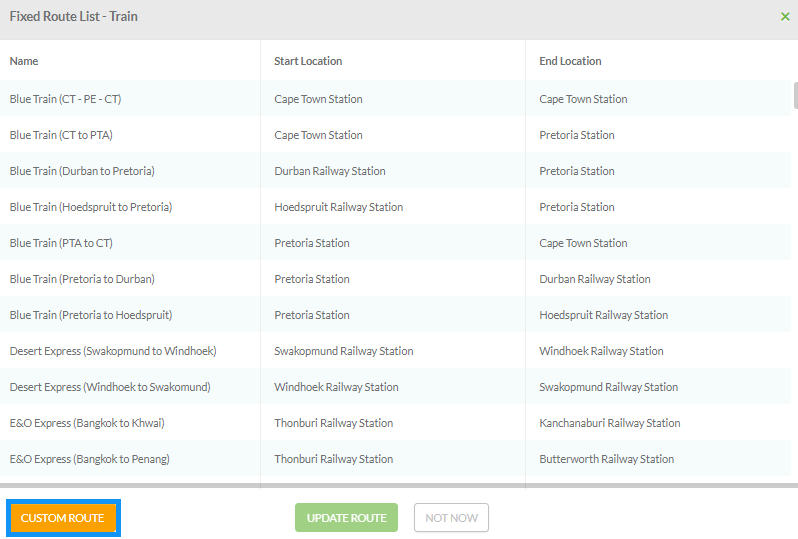 Note: In order to load your own custom train routes, you will have to know where to place the exact points on the map the train will be travelling.

The Custom Route Builder - Train will open with the start point ( A ) and the end point ( B ) indicated.

Clicking on the map will alter the route between point A and point B. Continue building the route by placing additional points on the map. If you make a mistake you can undo by clicking remove last point in the top right hand corner.

We would suggest using the Train ( No Route ) mode of transport when there is no specific route in place, however, you want your clients will still see the general direction of travel between the two destinations.

The mode Train (No Route) will draw a direct route between the Start and End stations, leaving the exact route of travel undefined

Did this answer your question? Thanks for the feedback There was a problem submitting your feedback. Please try again later.